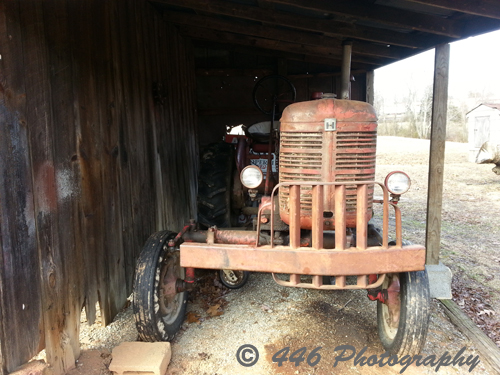 There I was, driving around at work minding my own business.....

I have been patrolling around this area for years at work and have been by this old homestead many times over the years.  I have even seen this tractor, but haven't really seen it as a photographic subject before.  As it turns out, a couple of days ago, I was talking with one of the family members of the property owner and he was telling me about how he grew up and worked the land out here when he was a kid.  I heard stories about him on the old Farmall tractor loading hay by himself.  He would leave it in low gear and let it idle by itself while he did what needed to do with the hay.  If it started to get off line, he would have to jump back on and correct the path before returning to the hay.  All of a sudden, after hearing this story, the tractor came alive for me and ignited my interest.

The problem with this tractor is its location.  It is under an overhang from an old barn where it just fits inside.  This means that lighting is difficult at best with the shadows involved.  To get the shadows exposed correctly, I would have to sacrifice the highlights on the outside of the barn as in this cell phone picture I snapped while scouting the location.  During the day, the nose of the tractor is hanging outside of the shade which again introduces issues with the shadow detail that I think is absolutely necessary for the image.  I had to do some thinking about how to properly render this image.  My best thought was to come out before dawn, so that any light that I would be getting from the sun would be low, and potentially able to provide some lighting into the shadows.  I was going to have to get in close, and come up with some very creative compositions in order to eliminate the outside as a distraction.  I knew that in low light, I would still be at a loss when it came to the shadow detail, so I figured that I would do a little painting with light.  The warm light from an incandescent flashlight should complement the wood tones of the barn siding quite well.

I had my plan, I just needed my day.

That day just happened to be my first day off.  The forecast was calling for cloudy skies early on so that would help to diffuse the light and potentially extend my time for this subject.  It was going to be cold, and actually get colder as the morning went on, with a pretty significant wind chill to add some interest.  When I left the house it was 27 degrees, by the time I got home it was 21 degrees...that was over the course of maybe an hour and fifteen minutes.

I arrived at the old farm long before the sun was over the horizon, but with the clouds, I wasn't likely to see the sun at all.  It was pretty much still dark when I was getting my camera bag out of the truck.  For the first time this winter I pulled out my photographer's gloves and put them on as my hands were already stinging in the wind.  I got the tripod set up and with the help of my flashlight, I framed the shot that I thought I had in mind from the previous day. I dialed in the focus and guessed at my needed depth of field.  I then set the shutter for 30 seconds which would give me enough time to provide all the light that I was going to have available for the image.  In the 30 seconds, I put a lot of light on the walls, and did a quick wipe over the tractor itself.  The resulting image (first exposure of the day) is seen above.  The effect that I wanted was there, but the result was lacking something.  Toni loves this one for the abstract quality, and she had the honor of naming it as well.  I'm still not sold on the image, but I can see potential in it through Toni's eyes.

While still in the early hours of the morning, I worked on some more compositions as I dialed in my vision for the shot.  For me previsualization is so very important for photography.  I have to have an idea of the final piece before I can set up the shot.  I worked in closer and closer until I had a view that I was pretty sure was what I was after.  It was another intimate shot, but composed completely different.

The resulting image captured what I had in mind from the powerful face of this International tractor to the detail in the wood of the shelter.  The headlight, much like an eye of a person stood out in a generally even toned image.  Yeah, I liked this one, liked it a bunch!  When I got home, however, I found out that while it captured what I was seeing in my mind, what I didn't realize was it was missing the emotion I was going for.  While editing it, I decided to give it a try as a monochrome image.  When I did, and started playing with the tonal values, I found an image that all of a sudden popped off of the page at me.  THIS WAS IT!  This had the feel, and more importantly, the emotion that I was going for with this tractor.

I had that gritty image that really stood out, and captured the enduring power of this old tractor.  Oh, did I mention, it is still in use to this day!  The patina of the finish would suggest otherwise which is probably why I am so drawn to this tractor.  It looks long since forgotten, but still has a sense of pride about it.

With the sun coming up, and things getting a bit brighter, I decided that I would try some other compositions of the tractor just to see what worked and what didn't.  I stepped back a good bit, and framed a tight shot that I wasn't quite sure I would be able to pull off.  Surprisingly, with some careful positioning, I was able to not only eliminate the outside, and the roof line, I was able to give the illusion of this being completely enclosed in a barn with me standing beside of it.  I was liking this view quite a bit.  I snapped a shot with the available lighting and was happy with the resulting capture.


I was happy with it, but it didn't sing like I was picturing it in my head.  Something was missing.  It lacked warmth, and it lacked some visual weight on the wood behind.  Well, I was still shooting in the range of 10-15 seconds so there was still time to add a bit of light with a flashlight.  I wanted more warmth, and more "mood lighting".

When I saw the resulting image with the additional lighting, I knew that was the trick.  It had the mood that I was after, and more of a visual balance between lights and darks. I was even happier with this, and it actually turned out to be one of my favorite images of the day.  But just because I was that happy with the image didn't mean that I was done with it.  I could see other potential to this composition as well.  To add to the old feel of it, with the very similar overall tone, I was seeing this as a sepia rendering.  I don't often use sepia in my prints, but I thought I would give it a try anyway.  I have to say, I actually like the sepia just as much as the full color image, which is odd for me.

There was just one more view that I really wanted to get on this old tractor before I left.  I wanted the detail of the nose and hood.  That patina was just calling out my name.  I got in close again and framed up the shot that I was looking for.  I was able to get the hood emblem as well as the tractor label in all of its aged glory in one shot.  As with the previous shots of the morning, the wood needed a little painting with my flashlight to really capture the detail.  With a limited depth of field, the wood was slightly out of focus, but the grain could still be made out while keeping the sharp focus right where I wanted it.

I was having a great time with this tractor, and there were some other things that I wanted to try around the property.  However, I could no longer feel my fingers, and the gloves were not helping at all.  I had lost the ability to move the zoom ring on my lens, and could just barely work the focus ring.  It was time to pack up and go.  The only problem with that was, I couldn't put the lens cap back on.  I dropped it three times before taking my gloves off (I had two fingers exposed) and by using one hand to hold the cap in place and the other hand with three fingers to squeeze the clips, I was able to put the cap on despite having no fine motor skills left.  I was done...and my hands were worthless now.

On the way home, I had the heat blowing on my fingers and they felt like a vise was squeezing them.  I was not a happy camper, not at all....but I had gotten what I figured was at least one good image from the morning out of about 16 exposures.  Little did I know that I had quite a bit more than one keeper out of these.  I'm quite happy with the morning, and am very happy to be back home with Toni and the heat!
Posted by Greg Kiser at 11:44