Well, this was the day before Thanksgiving, but thanks to Toni's schedule, this was actually Thanksgiving day for the Kiser house.  We are anything but normal most of the time, and this holiday is no exception.  In true form, Toni got up early and started to cook dinner for all of us.  For some reason she really enjoys doing this, and she prefers to do it while I'm not in her way.  So....while most men in the house would sit down and watch a ball game or maybe a parade, I set out to Hanging Rock State Park to give Toni some room to do her magic in the kitchen.  The weather was pretty good for waterfall work after going through a day long rain the day before, and it still being quite cloudy for this Trek.  I felt that it was a good idea to do some waterfall photography since that was my signature subject matter years ago.  It was also a really good chance to do some long exposure work, which is a slightly different form of photography...a bit more creative.

Hanging Rock is one of my perennial favorites to photograph, especially when it comes to waterfalls.  Not only are their 5 named waterfalls there with a handful of smaller ones scattered around, the park is close to the house, and the trails are rather short which makes short work of getting to the falls.  I arrived there shortly after the park opened and decided to head to the first waterfall I ever photographed which dates back to 2006, I believe.  The Lower Cascades is technically outside of the park, but it is under the umbrella of Hanging Rock.  It is a single cascade which flows to a couple other lesser drops down stream.  There are a number of compositions that will work with this waterfall, and I've probably worked every single one of them over the years.

When I got down to the actual waterfall, I found the water flow to be just what I expected.  The streams were swollen with the recent rains, and that increased the volume and speed of the cascading water.  The natural ponds were also at capacity at the base of the falls, and water was flowing over in several different locations.  The cloud cover was totally overcast, and there was nice and even lighting in the entire place.  An added bonus for going at this time of year was that there was nobody else in the park that I could tell. 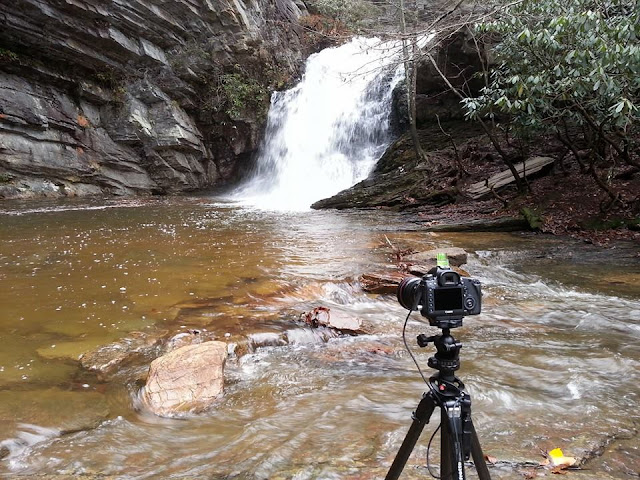 I scoped out several different compositions that I thought would work for the setting and all of the water.  After a half dozen tries, I found one that I really liked that incorporated a string of rocks which are usually right at the edge of the water.  They were very well into the pond today, and I thought made for a great foreground element, as well as a leading line into the waterfall itself.  This was the composition I really had the most faith in for a successful image.  In order to capture it, I fitted my wide angle 16-35mm f/2.8L lens to accentuate the rocks in the foreground, while really showcasing the rocky wall to the left.  I also utilized a polarizer to remove the glare from the water as well as the surrounding landscape since it was all covered with the remnants of the overnight rains.  In order to get a slow shutter speed, I also enlisted the help of my variable ND filter which allowed shutter speeds in the 20-30 second range, just perfect to blur the water, and smooth out the pond in the foreground.

The resulting image captured the drama of the waterfall, as well as the location.  Even with this drama, there is a certain serenity in this image as well.  The water was quite dirty with the increased flow which gave it a much more brown appearance than normal, but this actually worked for the image I thought.  The story here is really more of the rocks, and less of the waterfall itself which was a nice side effect of this image.  First of all, we have the rocks along the wall.  This has always intrigued me, and made me think of this waterfall as existing within a cave.  The second rocky element is the rocks in the foreground.  Some of them are above the water, most are below.  With the help of the polarizer, we can actually see a good amount of detail beneath the surface.  Just enough to prompt questions about what we are seeing.  I love when I can bring questions into my photographs.  I much prefer to initiate questions than provide answers in my photographs.

Before packing up from this location, I went over to the secondary stair step waterfall just down stream of the Lower Cascades.  This is a hit or miss affair most of the time with water flow.  I've seen it totally dry, and I've seen it flowing with a fury, as well as everything in-between.  On this particular day, however, the water was flowing with a vengeance and I saw the opportunity to capture a water abstract which can be fun to do at times.  I focused my attention on a prominent rock that was protruding from the rushing water.  I added a bit of the undergrowth for scale, and exposed for the rushing water.  These will often give some very interesting results as you can see here.  Normally, I would like to have gotten positioned a little more in the direct flow of water, but there was no way to secure the tripod in the flow.  I got as close in as I dared with the fast moving water.

From here, I had originally planned to go home, but I still had plenty of time left before I needed to start picking up my Mom and Grandfather who were coming to dinner with us later.  With some extra time to kill, I decided to drive on into the park and check out the Upper Cascades.  This is an interesting waterfall.  The first few times I photographed it, I was not impressed.  Actually, I found it to be the worst waterfall of the entire park.  Then, one day, I happened to photograph it after a heavy rain and the character changed completely.  It became one of my favorites of the park, and beyond.  There is just so much to look at with this waterfall.  It is nestled in a rather odd place, so compositions are harder to come by, but when the lighting is right (to avoid the deep shadows) and the water is flowing enough, there are some dramatic views to be had here. 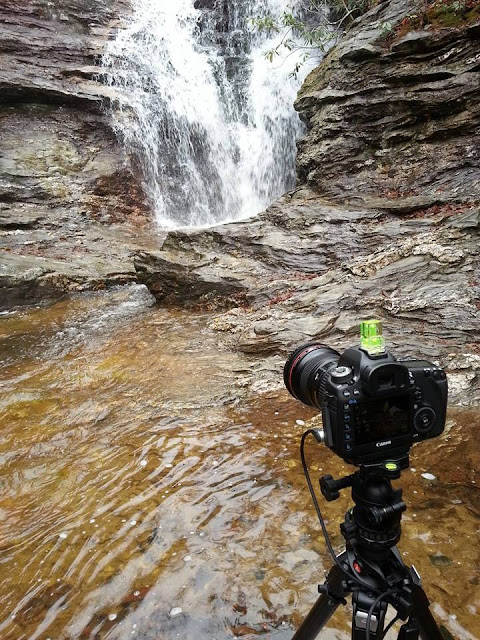 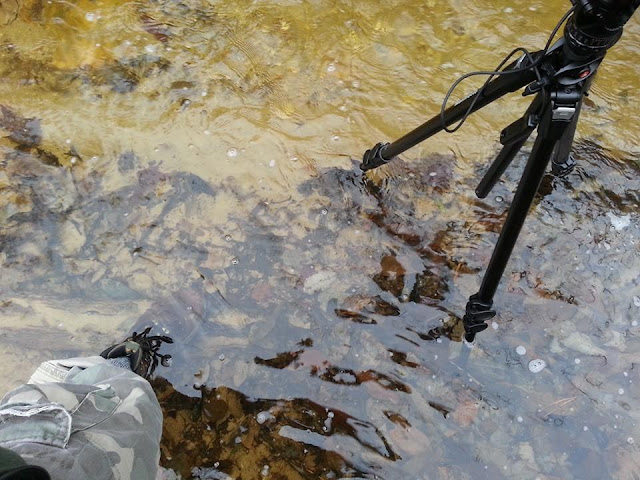 One of the problems with the dramatic views is that to get them, you will have to get in the water.  I was expecting this and had my waterproof boots on.  I also learned just where the Gortex stopped on this particular day as I was in a bit deeper than I normally go.  In the picture above, you can see I'm in the water almost to the top of my boot.  What you can't see is that I'm actually on my tip toes here....and still getting wet.  So my feet were cold and wet, I'm used to that when doing waterfall work.  Also worth noting here is that I have a several hundred dollar tripod with legs fully submerged for the sake of the picture.  This tripod is only about a week and a half old, and yet here I am.  This is how serious I am about my photography, and doing what it takes to get the image that I want.

The final image from the day turned out to be my most favorite of all of the captures thus far.  In fact, I dubbed this one my first "significant image" since picking the camera up again.  What I love about this one is the prominent feature of the waterfall which drops your eyes directly to the wonderful textures of the jagged shoreline to the right.  There is just a hint of moving water in the pond indicating a continuation from the falls.  The overall warm tone of this image is balanced out with the green of the surrounding undergrowth.  That is the nice thing about waterfall photography in NC.  It seems that most, if not all waterfalls are graced with year round greenery.  had it not been for the fallen leaves along the rocks, one would be hard pressed to pinpoint the exact time of year this photograph was made.

With it approaching lunch time, I figured it was time to head back home and get cleaned up so that I could go and get the rest of the family so that we could have Thanksgiving dinner.  It was most definitely a busy day, but such a fun day overall.  It was just my third Trek, and I was still getting reacquainted with the camera, but I was fast approaching my previous fluid operation of things.  I was happy with myself, and was starting to feel competent again behind the camera!

Oh, and for those worried about my cold and wet feet....my boots were left drying in the garage along with my soaked socks.  Toni took pity on me, and for an early anniversary preset she got me a nice pair of Danners which are much higher that what I had been wearing.  My feet should be much better off the next time I find myself standing in deep water.
Posted by Greg Kiser at 23:26